In 1846 the Donner Party, consisting of 89 men, women and children followed a fork of the Emigrant trail known as the California Trail to the area in order to attempt a crossing of Donner Pass. They arrived in late October but the heavy snows had already begun, making it impossible to continue. Their fascinating story may be learned by visiting the Donner Memorial State Park, west of Truckee on Donner Pass Road, near the east end of Donner Lake or by reading the excellent novel, “Trial by Hunger”.

The name Truckee came from a Paiute Indian guide. “Tro-kay” assisted emigrants coming across the Humboldt Sink. The Indian’s name sounded like “Tro-kay” to the white men, who dubbed him “Truckee.” He became a favorite of the white settlers who found him to be honest and helpful. Chief Truckee fought bravely alongside Col. John C. Fremont in the Mexican War and was the father of Chief Winnemucca.

Gold was discovered in Coloma in 1848 and silver in Virginia City in 1859. The Dutch Flat-Donner Lake Wagon Road was built during this time for commerce. The road ran from Sacramento over Donner Summit and into Nevada. It became the primary route for freight wagons and passenger coaches headed for the mines in Virginia City. Joseph Gray constructed a log station along the wagon road at the intersection of today’s Jibboom and Bridge streets by 1863.

S.S. Coburn operated a stage station and public house for teamsters in 1865. Coburn himself was a metal smith. He arrived from Dutch Flat with knowledge of the exact route of the proposed railroad. The Central Pacific railroad did select Coburn’s Station as the advance camp for the railroad construction crews. Workmen filled the area overnight creating a bustling lumber town.

On April 12, 1868, the Nevada City Daily Transcript announced: ” ‘Coburn’s Station’ has been discarded by the people of that town and it is now called ‘Truckee.’ We learn from a correspondent that the post office has been discontinued at Donner Lake and a new one has been established at Truckee.”

By the time the first train chugged through on June 9, 1868, the new town of Truckee encompassed the entire area opposite today’s C.B. White House along both sides of the tracks, including fifty buildings (mostly saloons), a hotel and twenty stores. Inevitably on the morning of July 30, 1868 a fire broke out opposite Campbell’s tavern, destroying 50 buildings most of which were located on the south of the track.

Logging continued as a key industry in Trucke. In 1866, Joseph Gray and George Schaffer, Truckee’s first entrepeneurs built and operated the first lumber mill, which was located on the opposite side of the river. In 1871 Schaffer purchased Gray’s interest and built a larger mill in Martis Valley, three miles south of Truckee. He also constructed a huge millpond in Martis Valley that now forms part of the lake next to the golf course in the Lahontan residential development.

Schaffer’s mill supplied lumber to the mines of Virginia City as well as to the growing cities of Sacramento and San Francisco. Shaffer later moved his mill a third time to a location further south where he built a home for himself and his workers near the bottom of today’s Northstar at Tahoe ski area.

Life in early Truckee was always exciting. Gold was plentiful, saloons and gambling houses attracted desperados of all kinds. Gunfights in the streets occurred almost nightly, many of which were consequential to disputes that occurred along Jibboom Street’s red light district. Numerous accounts of violence were published in the Truckee Republican, many chronicling tales of Jibboom Street’s infamous ladies of the night whose names included “Carrie (Spring Chicken) Smith;” “La Belle Butler” and “Lotta Morton.”

Historian Robert O’Brien wrote In his book, “California Called Them” that, ” Truckee went its own independent way and promptly became a juvenile delinquent among the California mountain towns.”

“It was neither as raucous or as tough as Bodie,” writes O’Brien, “but it was trying hard for the same effect. The lights along Jibboom Street, a few steps from the main drag, were just as red as any that beckoned the swaggering, free-spending Bodie badmen. The nudes of the back bars of the front street saloons were just as lush as those you found in the plush-and-crystal bars along Virginia City’s C Street.

Unfortunately as time passed, the good old days of opium dens, gunplay, tar and featherings, vigilantes gave way to more civilizing influences. The growing success of the lumber mills brought forth new entrepreneurial challenges, while the solid citizens of Truckee went about building schools and churches.

The Trout Creek Ice Company was formed in 1897 and followed by other ice companies which competed in producing ice for rail shipments to the east. The railroad was a major industry for the town of Truckee, however the automobile would ultimately undermine its economic value.

By 1915, Truckee became a favorite area for winter sports, featuring a huge ice palace for ice-skating and dancing, a toboggan slide and ski jump. The Truckee Ski Club was formed and its members participated in many competitions. Special excursion trains brought thousands of visitors to the area to enjoy the fresh air and to frolic in the snow. “The Snowball Express” ran regularly from Sacramento. In 1960 Truckee made its international debut with the 1960 winter Olympics held in Squaw Valley, USA. 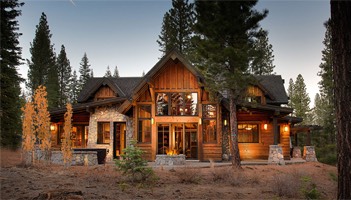